In Ohio, Scientists Make Progress Toward a Treatment for Deadly Neurological Disease 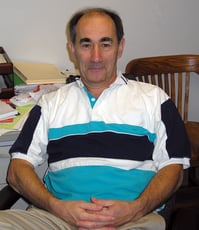 Ron Viola, a Distinguished University Professor at the University of Toledo, still remembers the moment he realized how sorely needed his research on the rare Canavan disease would be. He had just been awarded an NIH grant when the mother of a Canavan disease patient reached out to him, eager to know how his work might help her daughter. “What that told me is that these families are desperate for any progress at all to be made,” he says. Today, Viola continues to make good on the hope his grant first offered to those families so many years ago.

Canavan disease is a devastating and rare genetic neurological disorder. While affected babies appear healthy at first, severe symptoms associated with abnormal brain development typically occur in the first 6 months and most patients will succumb to life-threatening complications by the age of 10. There is no treatment or cure for Canavan disease, but scientists like Viola are working diligently to change that.

Viola built his career on studying enzymes: how they work, why they cause disease, and what can be done to replace or inhibit them to restore health. More than a decade ago, he read an article about Canavan disease. Though he’d never heard of it before, he was intrigued. The disease had already been traced back to a single gene, and it was the defective enzyme encoded by that aberrant gene that led to the disease phenotype.

Since then, Viola’s lab has contributed to a number of leaps forward in scientists’ understanding of how the disease works. Originally associated with a single enzyme that leads to insufficient levels of acetate in the brain, researchers now know that a second enzyme is pivotal as well. Working with collaborators, Viola and his research team solved the structure of the first enzyme and helped with experiments to test whether enzyme replacement therapy might alleviate developmental problems in a mouse model. Now, his group is focused on the second enzyme, N-acetylaspartate transferase. It’s an extremely challenging membrane-bound enzyme — difficult to solubilize and purify, with an unknown structure. It leads to an accumulation of a specific amino acid in the brains of Canavan disease patients and appears to be just as important to the disease progression as the first faulty enzyme.

But thanks to a collaboration with Atomwise, Viola and his team have made dazzling progress. “Unlike most of the projects Atomwise runs, we don’t have a structure for our target enzyme,” Viola says. The company’s sophisticated AI technology, called AtomNet®, was able to build a model of what the enzyme looks like and predict the binding site. With that information, the AtomNet® technology was able to screen large chemical libraries for compounds that could potentially inhibit the enzyme by docking to the site. “Having a known structure dramatically improves your chances of success for this kind of screen,” Viola says. “It would not have surprised me if none of the suggested compounds acted as inhibitors.

As it turns out, though, Viola was in for a surprise. Of the sixty or so compounds predicted to bind to this enzyme out of a library of over 7 million
compounds that were examined — based solely on a computationally predicted structure — five of them proved to be effective inhibitors when Viola’s team ran the functional tests. “The AI tool was able to fill in the gaps from a completely unknown structure,” he says. Using those five compounds as guides, Atomwise ran a new screen to look for similar compounds. Now, Viola and his team have “a total of about a dozen compounds that seem to be pretty good inhibitors of this enzyme,” he notes.

While promising, there’s more work to do before any of these compounds can move closer to medical use. Viola’s team is mapping out the strategy to move forward, which includes comparing structures and relative potencies of the compounds and identifying the elements of each compound that seem most important for inhibiting the enzyme. Eventually, this information will help push forward the best candidates into preclinical studies.

“There are still a lot of challenges for delivery and timing,” Viola says. “But we are definitely getting closer now to thinking about potential therapies for treatment.”