At UNC, Progress Toward a Targeted Oncology Treatment

After completing his PhD degree studying transcriptional kinases in yeast, Pengda Liu had one goal for his career: to make a difference for human health. Today, he is on the cusp of advancing a promising compound into the drug discovery and development pipeline. If successful, it would become the first targeted treatment for patients with Ewing sarcoma, a rare form of cancer primarily found in children. “In my lab, we have been talking about trying to find a drug for 10 years,” says Liu, who is an assistant professor at the University of North Carolina at Chapel Hill, where he works in the Lineberger Comprehensive Cancer Center. “This is the first time for our dream to come true.” 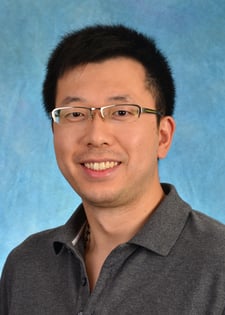 That dream, shaped by more than a decade of research at premier medical research centers, is moving closer to reality thanks in part to a collaboration with Atomwise. Liu won the company’s Artificial Intelligence Molecular Screen (AIMS) Award, a program giving academic scientists free access to customized virtual screening of millions or even billions of small molecules through AtomNet® technology. Winners also receive a plate of several dozen small molecule compounds for follow-up functional testing.

At Lineberger, Liu has embraced the center’s collaborative spirit and teamed up with colleagues studying conditions beyond his own lab’s focus on kidney and breast cancer. Another scientist told him about Ewing sarcoma, a cancer that forms in bone or nearby tissue, and how patients with this diagnosis still have to rely on conventional chemotherapy and radiation. Liu was intrigued: why were there no targeted therapies available for this cancer? Because the cancer is rare, there had been little drug development effort around it.

But there had been plenty of research into transcriptional events driving Ewing sarcoma, Liu learned. Unfortunately, those events were not druggable. With his background in protein modifications and protein regulation, Liu had a unique perspective on how to target this cancer. By studying a key protein found in all sarcoma cells and in no healthy cells, his team discovered that there were two enzymes required to keep that protein stable. Liu hypothesized that a small molecule inhibitor targeting those enzymes could destabilize those cancerous cells and prevent cancer growth.

That theory led Liu to apply for, and win, an AIMS Award. His protein information was screened in silico against 4 million compounds, with Atomwise’s AI tool mining the results to highlight the candidates most likely to work as desired. Liu’s lab received 73 compounds for follow-up testing on Ewing sarcoma cell lines, and one in particular really stood out.

In an iterative round of screening, also to be provided through the AIMS Award, the same protein targets will be run through Atomwise’s “10-to-the-10” program, which allows for computational screening of 10 billion compounds. This kind of scale is otherwise out of reach for academic labs. “Without the AIMS Award, we would have had to do some real drug screening, probably with thousands or maybe tens of thousands of compounds,” Liu says. “At that level, it’s really based on luck. This is really time-consuming and expensive.”

At UNC, Liu has access to an advanced drug screening facility. He says that the AI-powered results from Atomwise have aligned well with real-world results generated by medicinal chemistry experts at the university. “Even without a real structure, the AI can faithfully capture at least 80 to 90 percent of the key structural features of the target,” Liu says.

Now, Liu is working with UNC’s drug discovery unit to optimize the promising compound found through the AIMS Award. “Before we received those real compounds,” he says, “I never thought we would have a drug.”