Almost every organism on Earth tracks the planet’s day/night cycle, and uses that information to coordinate important elements of physiology and behavior. That may seem like just a fun bit of scientific trivia, but it’s actually a core component of human health. For people with genetic sleep disorders, late-night shift work, or even jetlag, the molecular mechanisms related to the circadian rhythm offer untapped potential to improve biological function. 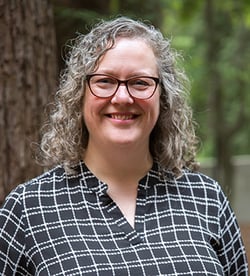 Professor Carrie Partch at the University of California, Santa Cruz, believes it may be possible to develop therapeutics that will help restore a person’s molecular clock. And now, as a winner of the Artificial Intelligence Molecular Screen (AIMS) Award from Atomwise, she will be able to test that theory using compounds designed to bind to a protein involved in molecular timekeeping. Through the AIMS Award, scientists in academia receive complimentary virtual screening of millions of small molecules through AtomNet® technology and a plate of as many as 72 small molecule compounds for follow-up functional testing. Awardees work closely with Atomwise team members, gaining access to deep expertise in computational biology and medicinal chemistry.

Partch has been fascinated by the molecular clock since she learned about it in graduate school. She helped solve the first crystal structure of a clock protein complex during her postdoc and made circadian rhythms the centerpiece of her UCSC lab when she opened its doors in 2011. In the last few years, her team has done a deep dive into the discovery that people considered extreme night owls — those who simply cannot fall asleep before 3 a.m. or so — share a genetic variant that lengthens the time of their molecular clock. That finding, made by scientists at The Rockefeller University, “fit in perfectly with my whole body of work,” Partch says. With her expertise in proteins, she recognized that the variant “suggested that there was this beautiful druggable pocket on a protein called cryptochrome.”

With the idea that she could identify a molecule that could bind to this target and restore a normal, 24-hour clock for affected individuals, Partch says, “we were off to the races.” She applied for the AIMS Award because high-throughput compound screening simply isn’t feasible for most academic labs. “We could never screen millions of compounds experimentally,” she says. “Atomwise’s AI-powered approach offers the ability to do things on a very large scale. It helps bridge the divide for an academic lab to start to do drug discovery without all the resources that a big pharma would have.”

The Atomwise AI was particularly interesting to Partch because of its unique way of scoring potential hits, which “increases the likelihood that there will be a binder,” she notes. Her team has built out a robust set of functional assays to test the compounds delivered by Atomwise. Their focus is on the interaction of cryptochrome and a transcription factor; in healthy cells, the protein turns off the transcription factor at night, and in the morning it comes back on to allow gene activity associated with daytime. “With these assays, we’re poised to see if any of the AIMS Award compounds will bind and regulate that interaction,” Partch says. “If a molecule binds to this pocket we’re targeting, it would absolutely be poised to regulate that interaction and control it.”

Because each cell has its own molecular clock, Partch says studies done in cell culture can pave the way for preclinical and clinical studies of a therapeutic candidate. “Doing this work with Atomwise lets us go from those atomic pictures of the proteins and jump forward to the potential for human translational work,” she says. “It’s incredibly exciting.”

If a strong candidate is found, Partch believes it could offer benefits to more than just people with the night owl variant, or jetlag, or unusual work hours. “Almost anything you can think of in your body is controlled by the circadian clock, from metabolism to cardiovascular function to hormone production and even other behavioral and mood changes,” she says. “If we can find a molecule that will help clocks stay ticking along with their environment, it should have a strong effect on promoting human health.”

UC Riverside Scientists Find Potential Treatment for AMD
‘All We Needed Was One’: How Montreal Scientists Found a Promising Compound for Cholesterol Regulation
In Ohio, Scientists Make Progress Toward a Treatment for Deadly Neurological Disease