Back in 2004, some of the world’s leading protein scientists and structural biologists teamed up to form a public-private partnership focused on teasing out structures of important proteins and sharing them with the entire research community. Fast forward to today, and the Structural Genomics Consortium (SGC) has facilitated the discovery and release of more than 1,500 high-resolution structures of human and parasite proteins.

The SGC is a remarkably successful effort. Largely funded by pharma companies such as Bristol Myers Squibb, Bayer, Genentech, Janssen, Pfizer, and Takeda, among others, the group includes some 200 scientists in labs around the world. Its success — not just in unraveling protein structures, but also in establishing alliances with competing companies — stems from its strong focus on areas of protein research that are typically considered precompetitive rather than proprietary.

“There’s a huge gap between knowing the gene sequence and making a drug, and that’s proteins,” says Cheryl Arrowsmith, Chief Scientist for the SGC Toronto laboratories and one of the organization’s founding members. “The SGC was founded as a high-throughput structural biology program working on human targets of interest to the pharmaceutical industry and facilitating an understanding of human biology.”

Another key hallmark of the SGC is its ongoing commitment to ambitious goals, represented in the launch of new initiatives. In 2008, the group began a program to develop chemical probes, which are important tools in the early phases of drug discovery. These probes are well-characterized inhibitors of protein function which can be used to validate preclinical targets. The SGC releases its chemical probes to the research community to support and accelerate drug discovery efforts around the world.

“The idea behind the chemical probes project is to work on targets that have not received a lot of attention in the scientific community,” says Peter Brown, SGC Toronto Project Manager. “Most research focuses on the top 10% of all target classes. That leaves a lot of underexplored targets for which we want to find chemical probes.” So far, the SGC has released about 50 chemical probes, mostly for proteins that regulate epigenetics, a new and growing area of drug discovery.

These probes are the foundation of a more recent SGC initiative known as Target 2035, which aims to develop and publicly release probes for every protein in the human proteome by the year 2035. “No single entity can do that on its own,” says Arrowsmith. “We’re trying to develop some of the technologies ourselves, but collaborators and their computational tools will be a key part of it.”

In their quest for enabling technologies, SGC scientists turned to Atomwise. They had been familiar with the company for years, but the opportunity to work together came when Atomwise began offering the Artificial Intelligence Molecular Screen (AIMS) Award. The program grants academic scientists free access to customized virtual screening of up to billions of small molecules through the company’s AtomNet® technology. Award recipients also get a plate of dozens of small molecule compounds for follow-up functional testing.

In 2019, SGC Group Leader, Levon Halabelian, applied for an AIMS Award to study a member of one of the most important and least-studied protein families: WDR domain-containing proteins. These are some of the most abundant proteins in humans, used in key cellular processes such as cell signaling, growth, and DNA repair. The proteins are known for their donut-shaped structure but are challenging to target with small molecules. Still, they are tempting targets for a range of applications, including novel cancer treatments.

Halabelian had managed to crystallize WDR12, elucidating key details about the protein’s structure. He submitted the target to Atomwise and was granted an AIMS Award for the project. The company’s research team, led by CADD scientist Tigran Abramyan, used the AtomNet® technology to screen millions of compounds against WDR12, identifying several small drug-like molecules predicted to have good binding affinity for a key target on the protein. Since then, SGC and Atomwise scientists have expanded their collaboration to cover several more WDR proteins. The compounds predicted to perform best — as many as 100 for each protein — are sent to the SGC team for follow-up testing. 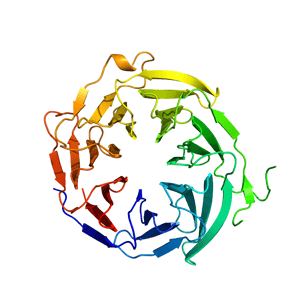 “Atomwise uses deep learning to predict drug-like molecules — essentially, predicting which keys may unlock the door based on the shape of the keyhole,” says Matthieu Schapira, Principal Investigator at the University of Toronto and a member of the SGC. “What SGC does is actually try to unlock the door with those keys. Our biophysical assays can verify that there’s direct engagement between the protein and each of these molecules.” The team looks for whether the molecule binds to the protein as well as how potently it binds.

AIMS Awards have helped SGC scientists overcome a long-running challenge with WDR proteins. “We’ve had a hard time finding hits for these proteins,” Schapira adds. Results from the Atomwise program have led to several promising molecules that can now be optimized and developed into chemical probes.

“The Atomwise technology is a very promising tool to identify the early hits so we can start to optimize those hits,” Halabelian says. “Now we are putting a lot of effort into validating those hits with orthogonal methods.”

Ultimately, the goal is to optimize these molecules, validate their binding, and publish them as a resource for the whole research community to use as chemical probes. “We think WDR proteins will be a gold mine for future drug discovery,” says Arrowsmith. “Working with Atomwise has allowed us to skip the expensive experimental step of initial screening and instead test a much smaller number of molecules. It’s a valuable collaboration.”