Jeffrey MacKeigan is not your traditional academic scientist. After completing his postdoctoral fellowship, he spent two years at one of the largest pharmaceutical companies in the world. That gives him a unique perspective on how academic labs, like the one he runs at Michigan State University, can take part in the drug discovery and development process.

“We knew we had to be smarter, and that we had to have more shots on goal to be successful,” he says. That’s why MacKeigan and his team are working closely with Atomwise in their quest to understand cancer cell biology and cell signaling.

MacKeigan, who serves as assistant dean for research at Michigan State University College of Human Medicine, has been fascinated with the process of autophagy since his postdoc. This natural cycle, which is regulated by the protein kinase mTOR, is turned on when cells lack the energy and nutrients to grow. Autophagy allows cells to hunker down and recycle proteins, fatty acids, and nucleic acids. MacKeigan’s lab focuses on cancer, and his team is eager to learn how mTOR and autophagy function in different cancer contexts.

“Cancer can be caused by many mutations,” MacKeigan says. “We’re trying to understand the genetic context of when to therapeutically target this autophagy pathway.”

Of course, answering that question depends on finding a potential small molecule to target the pathway in the first place. MacKeigan has the right background to tackle this kind of drug discovery quest. “My time in industry gave me a crash course in drug discovery at some of the largest scales you can possibly imagine,” he says. However now as a scientist at a publicly funded academic research institute, he doesn’t have the vast resources needed for traditional discovery and development.

So he got creative and reached out to Atomwise. “We talked about the diversity of targets within the autophagy pathway that lacked small molecules,” he says. “There are very druggable targets such as kinases, and then proteases and protein-protein interactions which are harder to target.”

“In industry, traditional large-scale chemical screens take months and millions of dollars to complete,” MacKeigan says. “With Atomwise’s ability to virtually screen those compounds, you can do that in much more rapid succession.”

For each project, the scientists submitted their target along with X-ray and cryogenic electron microscopy structures. “Atomwise ran AI-based structural screening for compounds, and they also did counter screens against similar molecules to drive selectivity,” MacKeigan says. Using this strategy for the virtual screen helps to ensure that resulting compounds not only show strong on-target activity, but also minimal off-target effects. 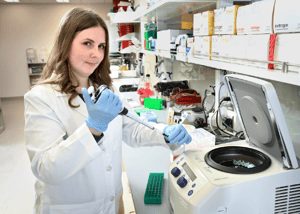 Now, MacKeigan’s team is running functional assays on the 72 compounds Atomwise delivered for each of the three projects to measure biochemical activity, together screening over 200 predicted compounds. While tests are still in progress for one of the targets, the scientists have already found at least two hits for each of the other two projects.

In the short term, MacKeigan plans to use any successful candidates as molecular tools to help elucidate the autophagy pathway, particularly as it relates to cancer. Ultimately, he hopes that one of these compounds, or a compound informed by his lab’s work, could one day be validated in preclinical and clinical processes for inhibiting the pathway in cancer patients.

For MacKeigan, the real prize is making an important contribution to the scientific community’s understanding of autophagy. He says, “academic labs are set up to understand the exquisite complexity of this pathway -- and that’s just what we aim to do.”