Atomwise scientists are adapting machine learning models to make predictions about a class of drug compounds that has been challenging to study.

Drug compounds that act as covalent inhibitors can modulate protein function with more potency, selectivity, and longevity than non-covalent ones. However, pharmaceutical companies have historically deprioritized these compounds in their drug discovery programs because of concerns about their toxicity and off-target effects. 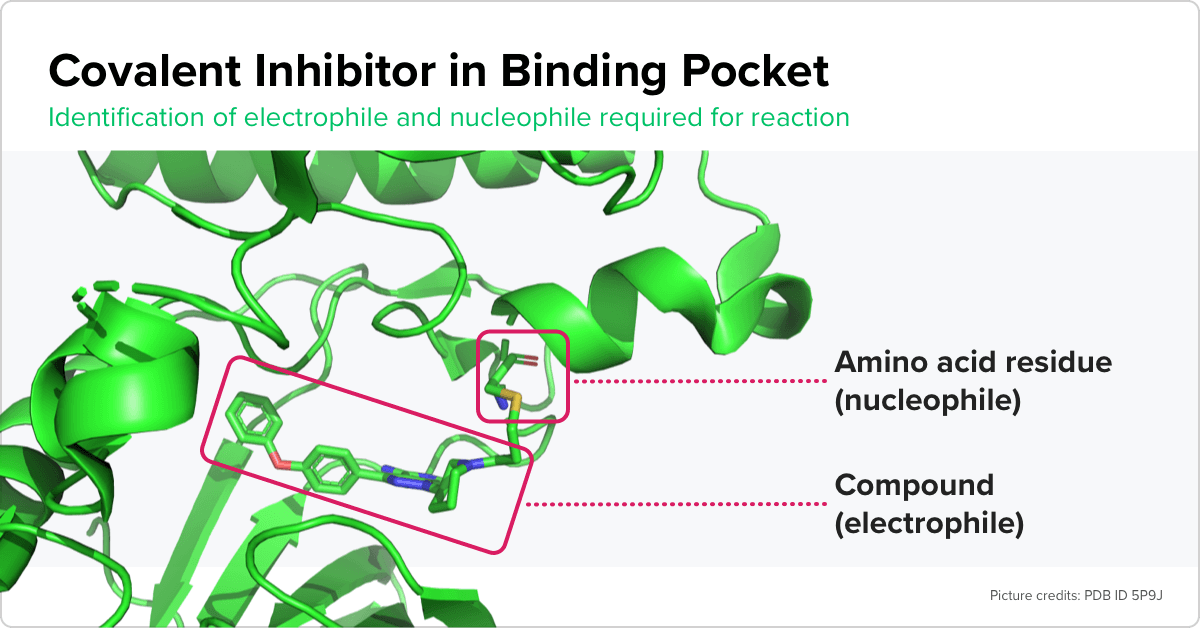 “These covalent interactions release a lot of energy, so they are very strong. One unintended aspect of these strong interactions is that they become less specific so they hit every protein,” says Srimukh Prasad, a cheminformatics scientist at Atomwise. Scientists also worried these compounds would be a risky investment because they did not fully understand their mechanisms of action.

However, there is a resurgent interest in these compounds. In the last decade, the U.S. Food and Drug Administration has approved 14 covalent drugs, including Amgen’s Lumakras, a covalent inhibitor used to treat adults with some forms of non-small cell lung cancer.

At Atomwise, the growing interest in covalent inhibitors presents an exciting opportunity for scientists to extend the capabilities of our current deep learning-based virtual high-throughput screening pipelines. These pipelines routinely screen billions of compounds against protein targets of interest. But the underlying assumption of the models is that the interaction between the protein target and the compound is purely non-covalent in nature. Working on covalent inhibitors posed a different set of challenges that our models would need to overcome to screen them.

Atomwise scientists employed a unique approach to generate this data. Covalent inhibitors have specific electrophilic functional groups called warheads that play an important role in their interactions with the target proteins. Target proteins that are amenable to covalent interactions must have specific nucleophilic amino acid residues in their binding pocket. Prasad first set out to automatically label interactions between hundreds of thousands of compounds and proteins that met these criteria as covalent.

The second challenge was figuring out how to modify Atomwise’s AtomNet® deep learning models to identify covalent inhibitors without compromising their ability to predict interactions with non-covalent compounds. The AtomNet® models account for the three-dimensional structures of the protein, the compound, and the potential pose of the compound when it is bound to the protein pocket. However, the models lacked the capability to incorporate the unique characteristics of covalent inhibitors.

To capture these features, Atomwise scientists added a constrained docking algorithm to CUina, their GPU-accelerated software for modeling protein-compound interactions. The constraint mimics the covalent bonds and generates docking poses for covalent compounds.

The algorithm incorporates scientists’ understanding of covalent molecules and mechanisms of interaction, adding information on warhead-protein residue interactions and the distance between these chemical groups. Using this information, the model can make predictions about covalent inhibitors in a high-throughput manner.

It's early days for this project. There is still work to do to train and test Atomwise’s covalent models as well as to ensure that the adaptations do not hinder their ability to predict proteins interacting non-covalently with molecules. But the first results have been promising. The quality of compound-protein docking poses for covalent compounds generated using the Atomwise models is comparable to published covalent docking protocols.

“This gives us the ability to develop promising compounds for classes of proteins that are difficult to target non-covalently,” Prasad says. “We hope this will lead to better therapeutics and improved patient outcomes.”

Dr. Srimukh Prasad was selected to present on this topic at the American Chemical Society Fall 2021 Virtual Meeting & Expo. Take a deeper dive by viewing his presentation deck:  https://blog.atomwise.com/a-virtual-high-throughput-screening-pipeline-for-covalent-inhibitors

Behind the AI: Synthetic Chemical Benchmarks for Testing What Structure-based AI Models Are Learning
Behind the AI: Atomwise Scientists Use Deep Learning to Locate Novel Allosteric Modulators in Silico
Identifying a First-in-Class Compound Targeting Miro1 for Parkinson's Disease