At the Drugs for Neglected Diseases initiative (DNDi), Ben Perry has an enviable position. A medicinal chemist by training, Perry now works with leading pharmaceutical companies and academic labs around the world. He also gets to try the latest technologies in his ongoing quest to find new ways of conducting early-stage drug discovery.

Perry runs the organization’s Neglected Tropical Diseases (NTD) Drug Discovery Booster project, which aims to accelerate discovery and lower costs for treating Chagas disease and leishmaniasis. The effort brings together pharma and biotech scientists to collaborate on pre-competitive parts of the discovery process. “We get traditional competitors to work together,” Perry says. “Normally these guys aren’t even allowed to be in the same room.”

Because the targets are neglected diseases, there’s virtually no money to be made from new treatments. “But a lot of companies want to work with us at least a little bit,” Perry says. After all, new insights discovered through a project about Chagas disease could still inform research into other, more lucrative diseases. Academic labs also actively contribute to DNDi by contributing molecules to ongoing optimization projects. 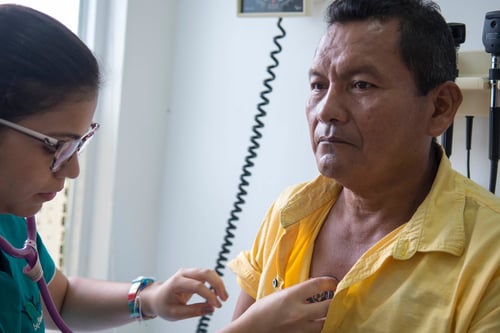 DNDi aims to develop an oral, age-adapted, shorter-course treatment for Chagas disease that is safer and more effective than current options, for use in all affected regions and in both chronic and acute patients, including during pregnancy. Photo Copyright Felipe Abondano - DNDi.

By working with so many stakeholders, Perry and his team get the benefit of a wide variety of approaches. “My personal belief is that the only way we’re going to get better at doing drug discovery is by trying lots of different things,” he says. “Some of those things are going to work and some aren’t. That’s science. But we won’t know unless we try.”

That try-anything concept opened the doors for discussions with AI pioneers at Atomwise. When the company launched its Artificial Intelligence Molecular Screen (AIMS) Award program in 2017, Perry was sold. “We realized that even though we work in neglected diseases, we shouldn’t be playing second fiddle to the big diseases when it comes to trying things at the cutting edge,” he says. “But we rely on public funds and have to be careful about where we put our money. The AIMS Award is a phenomenal idea that let us try out the Atomwise technology.”

So far, Perry’s team has submitted three Chagas disease targets for the AIMS Award program: one well-known, one less known but relatively straightforward, and one brand-new target expected to be a challenge for virtual screening. The Atomwise team, with projects led by VP of Computer-Aided Drug Design (CADD) Kong Nguyen and Senior CADD Scientist Mostafa Ahmed, got to work. While one target did not lead to new candidate compounds, the other two yielded promising results.

“We know from screening random collections what the hit rate should be,” Perry says. “The hit rate with Atomwise was 10 times higher.”

The X-ray crystal structure of the Trypanosoma brucei PEX14 co-crystallized with a small molecule inhibitor, which was used as a template for comparative structure modeling of one of the targets (PDB ID: 5N8V).

Perry and his collaborators are following up on those initial results by testing the candidate compounds against Trypanosoma cruzi, the parasite responsible for Chagas disease. They’ve also been working with Atomwise on a second phase of the AIMS Award, which entails subsequent virtual screening to look for closely related compounds that may have better pharmacologic properties. “It’s progressing well and we’re really interested in seeing what the second set of results will be,” Perry says. “They’re even repeating the target where we found nothing new because the AI will have learned more from its iterations on other targets in the past 24 months. It’s got to be one of the most trained and most used AI tools in virtual screening anywhere.”

To learn more about open innovation at DNDi: Open and collaborative drug discovery