With the implementation of genomic technologies, medicine is becoming increasingly personalized thanks to new treatments that target important molecular targets. In the context of Parkinson's disease, there is an urgent need to identify molecular signatures that are potential drug targets, as well as small molecule compounds that can hit those targets. Some exciting new research from scientists in the neurosurgery department at Stanford University, published in 2019 in Cell Metabolism, accomplished both of those goals.

Early on, the project was selected to receive one of, Atomwise's Artificial Intelligence Molecular Screen Award (AIMS) which gives academic scientists access to powerful computational drug screening algorithms in our AtomNet® platform to find potential new therapeutic approaches. The research initiative focused on a protein called Mitochondrial Rho GTPase 1 (better known as Miro1) found on the outer membrane of mitochondria, which anchors mitochondria to microtubules and motors and facilitates mitochondrial motility.

At the initiation of the project, no pharmacological agents targeting Miro1 were known and data implicating Miro1 in the disease biology of Parkinson’s was tantalizing. In cells of healthy people, Miro1 proteins are removed from mitochondria that become damaged, initiating degradation by the cells.  In patients with Parkinson's disease, genetic mutations in this pathway prevent the removal of Miro1, causing a clog in the system that would normally keep damaged mitochondria in check. The uniqueness of this genetic defect in Parkinson’s cases made targeting the Miro1 protein a promising new therapeutic approach.

Identifying a potential target was only the first challenge. The next step was finding a suitable small molecule that could potentially reduce or reverse the effects of dysfunctional Miro1 proteins in the cell — and that posed a unique set of challenges. As a completely novel biological target for a Parkinson’s drug discovery effort, there was very little experimental or structural data available for Miro1. In addition, there were specific criteria that selected compounds would have to meet, such as penetrating the blood-brain barrier (BBB) and having appropriate solubility, potency, and binding efficiency.

There were numerous possibilities for small molecules that could potentially target Miro1, especially when the hit compound could be one of the millions of chemicals present in a virtual screening library. Finding the right molecule was like finding a needle in a haystack, requiring expertise in computational chemistry coupled with powerful artificial intelligence algorithms that screened millions of small molecule compounds and assessed their efficacy for the Miro1 target.

“One of the advantages that AtomNet® had over other computational methods was that we didn't need a lot of existing data for this target to discover new small molecules," said Kong Nguyen, Ph.D. and Head of Computer-Aided Drug Design (CADD) at Atomwise.  “That’s one of the most important factors that differentiates our platform from other modeling technologies. In addition to its accuracy and speed, our technology is agnostic to any disease target. That’s why it's perfectly applicable to a situation like Miro1, where you have a brand-new target with no existing experimental data," Nguyen adds.

Starting with research data describing the structure of the Miro1 protein, Nguyen and his team at Atomwise searched publicly available structures in the Protein Databank to identify candidates for use in the AtomNet® neural network, which was trained to predict the binding affinities of thousands of protein structures against several million small molecules. The team was able to model different structural “poses” of each given ligand within the binding cavity of Miro1, with each pose representing a putative co-complex.

The target site the team ultimately focused on for screening was the GDP binding site of the human Miro1 (PDB structure ID: 5KSO) and screened roughly 6.8 million small organic molecules against these sites to find the best hits.

The output of this process was a list of 80 compounds that were predicted to be binders of defective Miro1. The compounds were ordered and shipped to the research partner at Stanford for testing in functional assays in the lab. After several rounds of testing the top recommendations, the final candidate, named Miro1 Reducer, successfully promoted Miro1 degradation in primary fibroblast cells from Parkinson’s patients. Importantly, the compound appeared to be highly specific: tests showed that the Miro1 Reducer did not affect normal Miro1, nor did it appear to affect the other isoform of Miro protein.

This was the first small molecule identified that targets Miro1 in the context of Parkinson's disease. With the support of powerful AI technology, it took roughly two weeks to screen the compounds and ship the predicted hits to the Stanford team. "It was the perfect case for us to demonstrate our AI capability," Nguyen says. "We demonstrated that our technology can quickly identify a completely novel small molecule for an important biological target in a very short amount of time." 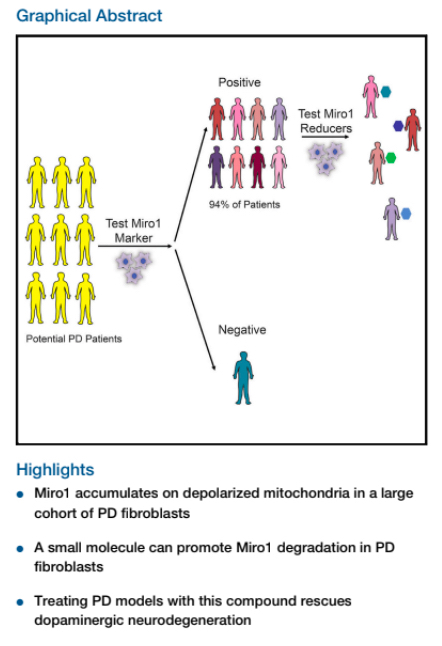