Matt Alteen is used to convincing people that sugars do more than we once thought. While most of us associate carbohydrates strictly with diet and nutrition, scientists like Alteen are working to show that these natural compounds have a much broader range of functions.

“Glycobiology (the study of carbohydrate structure and function in living systems) is an area that hasn’t been as well understood as other aspects of human health,” says Alteen, a postdoctoral fellow in the Vocadlo Research Group at Simon Fraser University in British Columbia. “Carbohydrates play many roles in regulating basic processes in human health, including signaling between cells. When that’s disrupted, it can trigger the onset of diseases, such as cancer and neurodegenerative diseases like Alzheimer’s.”

With implications like that, how have carbohydrates remained such uncharted territory? It turns out that these compounds are remarkably challenging to study. “From a chemical standpoint, it’s sometimes difficult to synthesize the sugars that are involved in these processes,” Alteen says. “They’re very complex molecules.” Without tools to synthesize, visualize, and perturb carbohydrates and their interactions with other biomolecules, it’s tough to perform the basic research needed to understand their effects on health and disease. 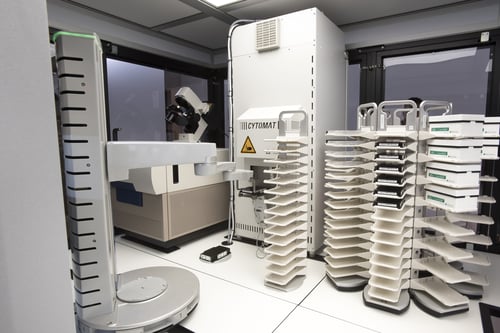 Despite that limitation, it is still possible to target the enzymes that add and remove carbohydrates with drug compounds to alter their activity — work that both paves the way for possible therapies and helps elucidate the role of carbohydrates in a range of cellular processes. Alteen has focused on an enzyme known as O-GlcNAc transferase, which can trigger processes that eventually lead to the onset of cancer when its activity is unchecked. Like many other sugar transferases, it has proven to be a challenging target to drug with a small molecule. In recent years, Alteen has built up the screening tools, functional assays, and data analysis techniques needed to target this enzyme.

The O-GlcNAc modification. O-GlcNAc transferase (OGT) catalyzes addition of O-GlcNAc on serine and threonine residues of proteins using UDP-GlcNAc, which is derived biosynthetically from glucose. This modification impacts the stability and signalling activity of numerous proteins involved in cancer signalling and cell cycle control.

The one thing he couldn’t build up, though, was a pharma-scale drug discovery and development budget for the academic lab he works in. That’s where Atomwise came in. Alteen wrote a successful application for the company’s Artificial Intelligence Molecular Screen (AIMS) Award program, which grants scientists free access to customized virtual screening of millions or even billions of small molecules through its AI-powered AtomNet® technology. Award recipients also receive dozens of small molecule compounds for follow-up functional testing.

“The Atomwise program gives an academic lab the chance to get access to this really cutting-edge artificial intelligence technology to help advance their own goals toward finding compounds against their targets,” Alteen says. “They predict the sorts of compounds you should look at first and prioritize a smaller set that’s much more manageable to screen. It’s proving to be a much more efficient approach to finding a compound of interest.”

For this project, Atomwise experts reviewed the enzyme structure and focused the virtual screen on its active site. Following that initial screen, they sent a plate of nearly 100 compounds for follow-up testing to Alteen. “We found two compounds with reasonable activity for inhibiting the enzyme, which was encouraging,” he says. “It was a good starting place.”

Next, Alteen’s project was selected for a second round of virtual screening through the AIMS Award. This optimization round focused on the structures of the two promising candidates, looking for close analogs that might have a stronger effect. Alteen received a second plate of almost 100 compounds, and this time the results were even better. “About half the compounds showed some activity, and several were particularly promising because their potency was significantly improved,” he says. “It was exciting to see that huge jump in efficacy from a single optimization round.”

That second round also allowed Alteen to dig into the structure-activity relationships (SAR) of these compounds, revealing important details about the molecular features the enzyme is more likely to bind to. This information will be critical for future optimization of the compounds.

Secondary SAR-by-catalog virtual screen was performed based around the inhibitory scaffolds identified. Four improved inhibitors with 3-5 fold increases in potency were identified. Structure-activity relationships reveal the presence of conserved motifs and regions for further optimization with isosteric groups.

Today, Alteen is eagerly awaiting a third round of compounds from Atomwise, this time based on a subsequent virtual screen focused on the candidate with higher potency. “We’re really excited about this,” he says. “At first, I was a little bit skeptical about whether virtual screening would work in our case. Being able to partner with Atomwise to use the most cutting-edge computational processes let us try it out, and it was really fruitful. I believe AI is going to be a really important component in drug discovery in the coming years — especially for targets that are less druggable.” 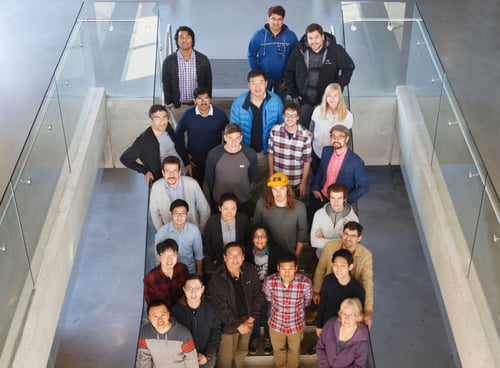 Matthew Alteen and his team at Vocadlo Research Group, Dept. of Chemistry

The Future of Drug Discovery: AI Impacting Upon Hit ID Strategies
Atom Spotlight: Ben Samudio, CADD Scientist
‘All We Needed Was One’: How Montreal Scientists Found a Promising Compound for Cholesterol Regulation