You probably hear about AI on a regular basis, but if you’re not a programmer steeped in machine learning algorithms, AI can seem like a mysterious black box.

Here at Atomwise, we use AI every day as a tool to accelerate drug discovery for our development programs and together with our discovery partners. This tool, the brain of our AtomNet® platform, has an important role to play in finding potential new medicines for untreated disease. To give you a better sense of how our AI technology works, we’re profiling some cool projects led by our technical team to improve the performance of our AtomNet® platform.

Today our focus on Behind the AI is on the advancements made by Software Engineer Tushita Gupta. Her work was essential to speed up our computational ability to handle ultra large screening libraries. A graduate of Carnegie Mellon University with her bachelor’s and master’s degrees in computer engineering, Gupta was charged with refactoring our production infrastructure to more efficiently run virtual chemical screens that determine whether a molecule is likely to have the desired structure to bind to a target of interest.

The Atomwise team has to be able to screen billions of molecules at a time — and that’s a huge computational lift. Before Gupta’s project began, our process took 12 days to screen that number of molecules. By tackling computational complexity, scaling resources, and logic reusability, Gupta made huge progress.

“A lot of it was really figuring out the best ways to split up the work and scale it so not only is it cost effective, but it’s also still fast and efficient,” she says. By slicing the screen into smaller processes that can be run in parallel on smaller, cheaper computers, Gupta managed to reduce the time for screening billions of molecules to just a day or two. 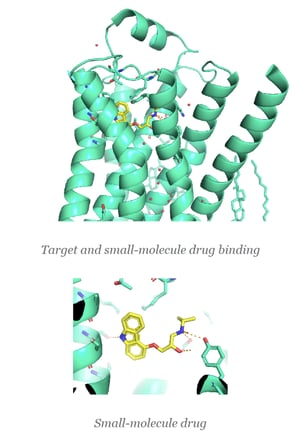 For optimal parallelization and distribution, the original Atomwise approach independently ran evaluations of each individual molecule using a two-step workflow featuring Docker containers and the Kubernetes system to choreograph containerized applications. To accelerate this process, Gupta identified the main source of complexity in the containerized workflow: a step that entails thousands of tree searches per molecule. An alternative machine learning method to intelligently explore the chemical space and identify molecules that should be evaluated by the two-step container workflow instead of exhaustively evaluating all molecules allowed her to reduce this complex computation.

Gupta also dug into the Python scripts that wrap our machine learning model, again looking to reduce complexity. She used a microservice approach to break applications up into smaller, more specialized parts for more efficient use of Kubernetes. Gupta built separate microservices to run the containerized workflows, replacing more complex logic with simple API calls. Taken together, all of these improvements made it possible for AtomNet® technology to scale up from screening 10 million to 10 billion molecules. Now the company can run a 10 billion molecule screen in two days — that’s about 2,000 molecules per second on NVIDIA GPUs on the Amazon Web Services cloud.

With this kind of performance, Gupta sees the AI tool developed by Atomwise as a natural fit for updating the traditionally slow approaches to drug discovery. “The reason AI is really helpful is that it doesn’t need so much overhead to do all the simulations and modeling,” she says. “It can estimate by itself based on the data we have collected and get results faster.”

When it comes to drug discovery, faster also means cheaper. Screening billions of molecules using conventional approaches would take vast sums of money and months or even years to complete. With AtomNet® technology, we can explore that same chemical space in two days at a sliver of the cost. We view this as a transformational approach to drug discovery — one that could allow for cost-effective development of treatments for orphan diseases and other conditions that haven’t made financial sense in the traditional pharma model.

Atomwise is revolutionizing how drugs are discovered with AI. We invented the use of deep learning for structure-based drug discovery, today developing a pipeline of small-molecule drug candidates advancing into preclinical studies. Our AtomNet® technology has been used to unlock more undruggable targets than any other AI drug discovery platform. We are tackling over 600 unique disease targets across 775 collaborations spanning more than 250 partners around the world. Our portfolio of joint ventures and partnerships with leading pharmaceutical, agrochemical, and emerging biotechnology companies represents a collective deal value approaching $7 billion. Atomwise has raised over $174 million from leading venture capital firms to advance our mission to make better medicines, faster.

Behind the AI: Reconfiguring Key Code to Supercharge Molecular Docking
Atomwise is Speeding up AI Drug Discovery with NVIDIA
How an AI Startup Could Defeat Now Unbeatable Bugs