It’s not unusual for scientists to be discouraged by a lack of treatment options for their disease of interest. There is, however, a special kind of frustration for researchers who have clearly identified a promising biological target for treating the disease — but nobody can figure out how to get at it.

Such is the case for Daniel Keedy, assistant professor of chemistry and biochemistry at the Advanced Science Research Center at The Graduate Center of City College of New York. His structural biology lab focuses on targets including the protein tyrosine phosphatase PTP1B, a regulator of the insulin signaling pathway. “It’s known as the Achilles’ heel of diabetes, but it’s also considered undruggable,” he says. “If you target its active site, you’d have too many off-target, non-specific effects with other protein tyrosine phosphatases.”

As an expert in protein structure, Keedy has a keen interest in finding ways to target therapeutically important proteins without relying on their active site. “We study the three-dimensional structures of proteins, but not just their static structures — how those three-dimensional structures move, how the proteins breathe as they accomplish their biological functions,” he says. His team is particularly focused on allosteric sites, which use not-fully-understood mechanisms to send a signal to another part of the protein. “It’s like remote control within the protein,” Keedy adds. Thanks to state-of-the-art X-ray crystallography techniques, his team is performing innovative experiments to reveal different conformations of the proteins engaged in an allosteric response.

Keedy’s hypothesis is that while active sites within the PTP family may be too similar to target with specificity, the allosteric sites on those proteins could be different enough to allow for laser-like targeting of a single protein, such as PTP1B. “We think the idea of allostery could be very important here,” he says. In addition to diabetes, breast cancer and other diseases have been associated with PTP1B. Finding a way to inhibit that protein specifically, without hitting its PTP siblings, might offer an entirely new way of treating these diseases.

With the protein structures his team had generated, it was clear that the Keedy lab’s next step was to try to find a compound that could inhibit PTP1B's allosteric site and open up new therapeutic approaches for multiple diseases. They began ordering compounds using existing databases, but pinpointing a winner from an assortment of more than 1 billion available compounds was a long shot at best. “We don’t have the expertise or wherewithal to explore a chemical space that large,” Keedy says. “We gave it a bit of a go, but it took a lot of effort and time.”

So Keedy took a different gamble, this time applying for the Artificial Intelligence Molecular Screen (AIMS) Award from Atomwise. The award program, available to scientists in academia, grants free access to customized virtual screening of millions of small molecules through the AtomNet® technology — plus a plate of as many as 72 small molecule compounds for follow-up functional testing. 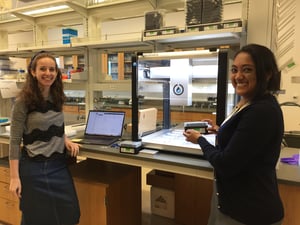 His application was selected, and Keedy took his trove of protein structure data to Atomwise for analysis. “They developed a number of compounds that were targeted to this site,” he says, noting that the AIMS Award allowed for the review of an exponentially larger chemical space than would have been feasible by the multistate docking approach his lab had been exploring. While functional testing has not yet been finished for all of the Atomwise compounds, Keedy notes, “We can already say that there are several high-affinity binders among the ligands that Atomwise sent.”

One of the reasons Keedy sees the Atomwise approach as so promising is its iterative use of AI. Through a collaborative approach, Atomwise acts as a partner beyond the initial hit screening, and continues to work with partners through stages of hit-to-lead and lead optimization. “What we’ll do is determine the three-dimensional crystal structures of the best compounds, and those could then become new inputs into the AI,” he says. “The next generations of compounds would only get better over time.”

A successful compound could open up an important new avenue of research into targeting the high-value PTP1B target. “We’re hoping that with the right allosteric inhibitor, we could work toward the development of a drug that could be a great treatment for diabetes, breast cancer, and other diseases,” Keedy says. Successfully targeting an allosteric site could also have implications for other challenging protein targets associated with a broad range of diseases.

Long before a candidate compound might become a treatment, Keedy’s team aims to answer some lingering questions about how allosteric sites influence a protein. “We’re trying to understand the mechanisms of this phenomenon of allostery,” he says. “How does one site in a protein communicate to another site dozens and dozens of atoms away?” He sees the small molecules identified through the AIMS Award project as a key scientific tool that could help provide those answers.