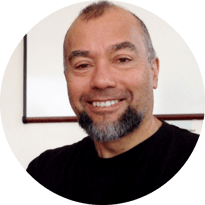 Long before SARS-CoV-2 triggered the worst pandemic most of us have ever experienced, Nito Panganiban was concerned about the ability of RNA viruses to leap from animal reservoirs into the human population. In the past century, there have been more than 70 emerging RNA virus outbreaks in humans. “This is happening all the time,” says Panganiban, Professor of Microbiology and Immunology at Tulane National Primate Research Center. “We have to be ready for the next one.”

As a virology veteran, Panganiban had reason to be concerned. He started out studying bacteriophages, later shifting gears to focus on viruses that infect eukaryotes. Since then, his expertise has been in the area of emerging RNA viruses, including retroviruses, flaviviruses, bunyaviruses and coronaviruses. “Many of the studies in my lab have looked at the function and structure of RNA in virus replication and in the host response to infection,” he says.

Unlike many academic scientists whose sole focus is to elucidate the biology of the organisms they study, Panganiban dreams of making a bigger impact on public health by helping to develop new AI-based treatments for viral infections. But, as the mad scramble for therapeutics or vaccines to beat COVID-19 has shown, the current landscape of antiviral treatments is in a sorry state. Existing antiviral strategies, including vaccines, tend to be specific to a single virus species and are unlikely to have utility against future emerging viruses.

Panganiban believes the real game-changer for managing emerging viruses would come from broad-spectrum antivirals that would be effective against entire families of viruses, including species that haven’t yet emerged among humans. “The hope is that we’ll also be able to use these as antivirals against RNA viruses that don’t exist yet,” Panganiban says. “But if this was easy to solve, we’d have some broad-spectrum antivirals right now.”

That mission is what brought Panganiban to Atomwise. When he learned a few years ago about the company’s AI-powered virtual screening technology to identify small molecule inhibitors and other compounds, he thought this approach might succeed where so many other attempts had failed. “I thought this could be a nice opportunity to come up with a new broad-spectrum antiviral in the form of a small molecule,” he says.

Panganiban’s lab applied and was selected for an Artificial Intelligence Molecular Screen (AIMS) Award from Atomwise. The program, open to academic scientists, offers free access to customized virtual screening of millions of small molecules through Atomwise’s AtomNet® technology. Scientists also receive a plate of as many as 72 small molecule compounds for functional testing.

This particular project was designed to make progress toward a broad-spectrum antiviral against flaviviruses, a notorious family of viruses that include Zika virus, dengue fever, West Nile virus and more. Panganiban’s team aimed to “target a component of the virus that is absolutely essential and is conserved at the level of the protein structure,” he says. The unparalleled speed of Atomwise’s screening approach also allowed Panganiban to look at homologous virus targets within the family and try to identify commonalities within the higher-order structure, he notes.

Already, results appear promising. “We have a couple of hits from that initial screening,” Panganiban says. For future efforts, his research team plans to further test the compounds with functional assays to make sure the inhibition is happening the way they want it to. “If those compounds pan out, then we’ll work with Atomwise to try to find similar chemical derivatives and screen more of them,” he says. 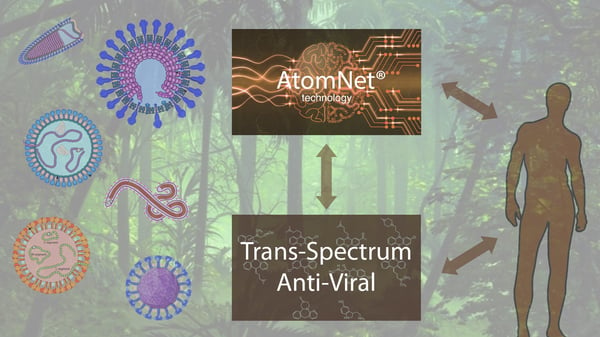 While this work is still in a relatively early phase, there’s so much enthusiasm on both sides that Panganiban and Atomwise have formed a joint venture called vAirus to continue the development of strong candidates with broad-spectrum antiviral potential. In the future, Panganiban hopes to see vAirus projects branch out to include possible broad-spectrum treatments for bunyaviruses, an order containing deadly hantaviruses, Rift Valley fever virus, and many others.

In addition to small molecules that would target these viruses directly, another approach is to focus on compounds that inhibit viral replication within the host. “We have what we think is a high-potential host target that looks like it’s required for the replication of many different viruses,” Panganiban says.

While the development of a novel small molecule candidate could take years, Panganiban is excited about taking the first steps toward the kind of antiviral treatment he believes is necessary to protect ourselves against viruses that may pop up in humans in the future. “We need to do something proactively instead of just reacting when a new virus emerges,” he says.